(to see a printable version of all the workshops taught by the artists, click here)

Magdalena and German are the winners of the World Salon Tango Championship 2017 in Buenos Aires, Argentina. Their style is characterized by its elegance and expressiveness, as well as by its original musicality. They dance with passion but at the highest professioinal level. They are able to incorporate contemporary elements in tango while respecting the traditional dance. They have performed with many important and renowned dance companies, performing in theaters in Argentina and in the world. They have also participated in innumerable International Festivals, sharing their love for tango.

Magdalena Gutierrez began her tango career in the year 2000. She attended several Tango schools with a variety of of the most famopus teachers in Buenos Aires. Her professional career as an artist and dancer took off a couple of years after as she was performing in various tango houses in Buenos Aires: Tango Complex, Piazzolla Tango, and Tango Gala. Magdalena was part of the cast of great tango shows, which have been known worldwide, such as Divine Tango (Passions Company, touring through Spain, Italy, Greece), Tanguera (National Theatre, Argentina), Evita (South Korea), Tango Emotion (Teatro Nacional, Argentina), and Chantecler Tango (Paris, Tokyo, Teatro Alvear, Argentina). She is also a member of the "Cuadro de Jovenes de la Academia Nacional del Tango" (Youth of the National Academy of Tango). She also toured around the world with her then partner, the great teacher and dancer Horacio Godoy. In 2015 she started working with German when they joined the Mora Godoy Company, performing the show "Bailando Tango" in the famous Astral Theater, in Buenos Aires.

German Ballejo is a young tango professional, who stands out for his musical, creative, and elegant dance. With an extensive background on the stage and his love for tango salon style, he is characterized as being a complete dancer, expressive, and with great acting and teaching skills. In 1995, at the age of 10, German attended his first dancing lessons. His formative years were crucial to his present dance style as he took classes in various academic institutions and was part of several groups of choreographic dance. This blend between the creative side of the popular dances and the professionalism required to work on the stage is a defining trait of his art. In 2010, he moved to Buenos Aires where he began his career as an artist and dancer working in different tango houses: Complex Tango, Gala and La Ventana. Also, he performed in companies like Tempotango and Pasion de Tango, which gave him the opportunity to go through some of the most important stages and local theaters in Buenos Aires. In 2014, he worked for the prestigious and famous Spanish singer Julio Iglesias. In 2015 he joined the Mora Godoy Company, where he partnered with Magalena performing the show "Bailando Tango" 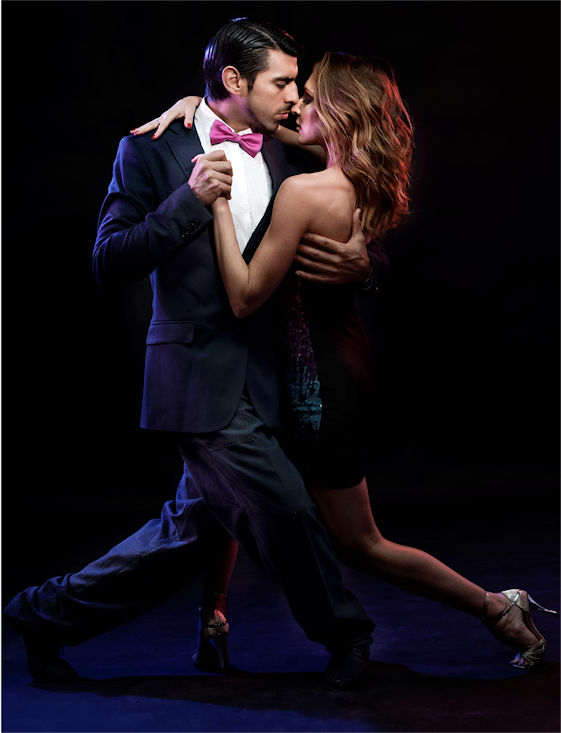 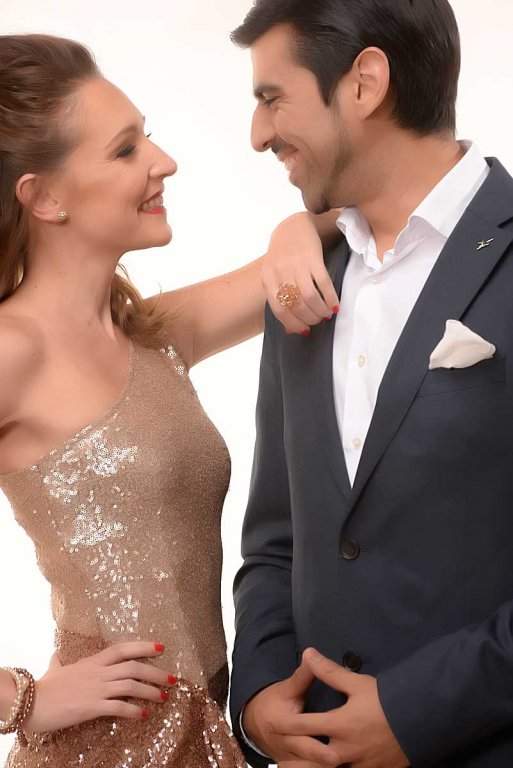 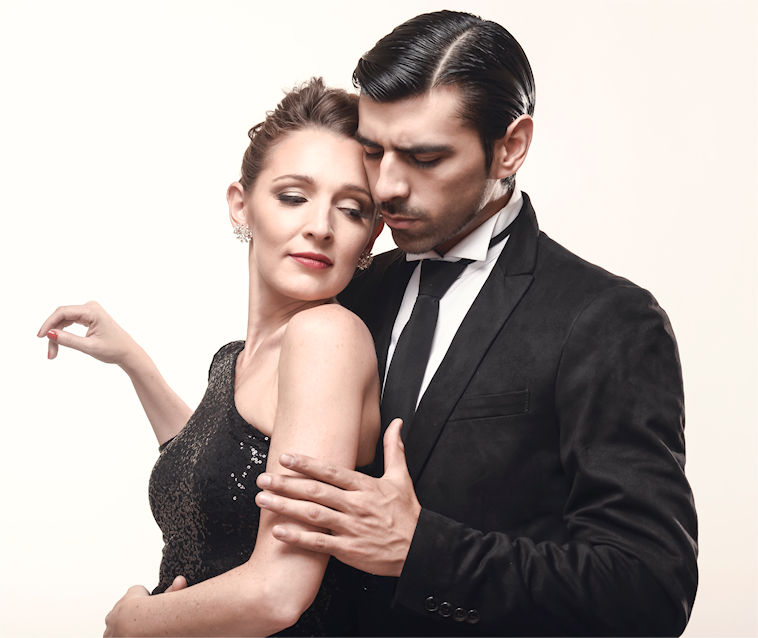 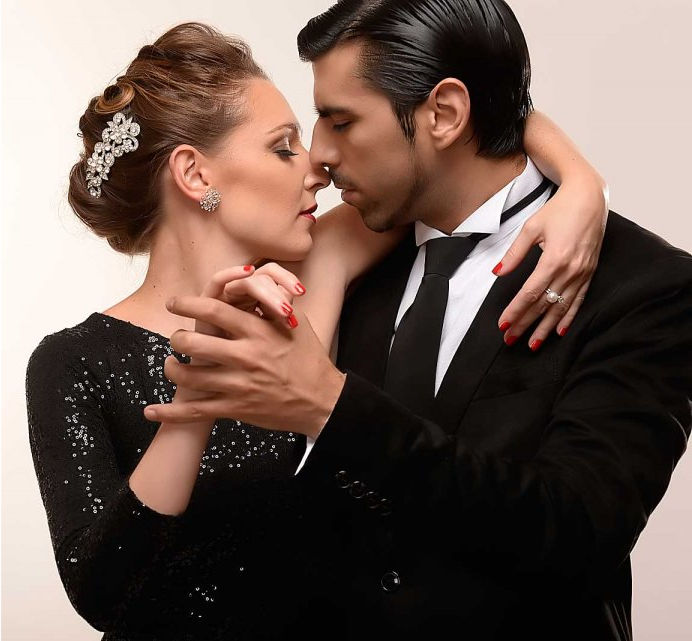 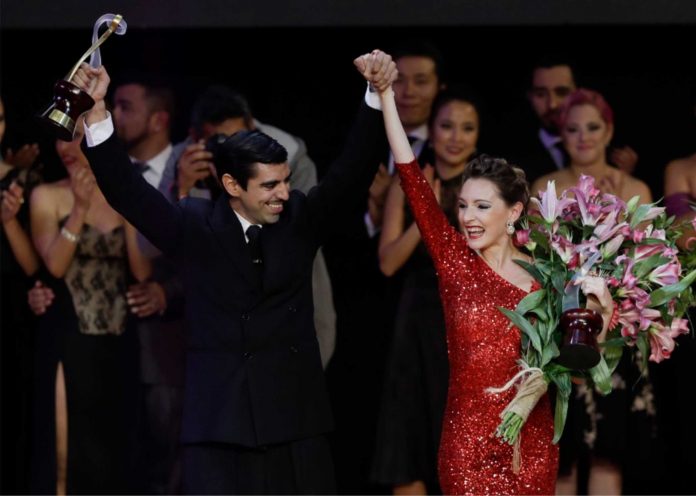 Carlitos Espinoza & Noelia Hurtado (Buenos Aires) have been dance partners since 2011 and are one of the favorite couples of tangueros all over the world! They bring tango back to its roots, the feeling of two bodies moving together in perfect harmony, expressing the music with their partner. They have inspired countless dancers and teachers by taking tango back to its essence of feeling, connection, and musicality.

Their unmistakable style celebrates close embrace and elegance with energetic dynamics that will take your breath away. They transfer music into the movements of the body, turn their dance into an sublime sensual experience. Carlitos is the master of musicality, and Noelia is one of the most influential female dancer of the generation with large crowds of followers all over the world. They have become invited teachers and performers at many of the most famous tango festivals in the world, and their Youtube videos have been viewed more than a million times.

Carlitos Espinoza has been dancing for eighteen years and has acquired an enviable reputation throughout the tango world for his authentic close-embrace milonguero tango. His style is characterized by a rare combination of extreme dynamism, profound musicality, energy, precision, and a very grounded and elegant walk. As an instructor, Carlitos is masterful. He works on multiple levels with students, simultaneously developing technique and mechanics while challenging the students interior landscape, and their process of conceptualizing while they lead or follow.

Noelia Hurtado started her tango journey in 2003. She studied intensively with maestros Carlos Perez and Rosa Forte where she learned the basics of the well-known Villa Urquiza style. Her dance, fast and responsive, modulates the energies of the dancer and the dance music fusing them into a soft and smooth aura. Each tango's harshness is softened to the extent that the couple looks as if they were dancing in the air rather than on the ground. 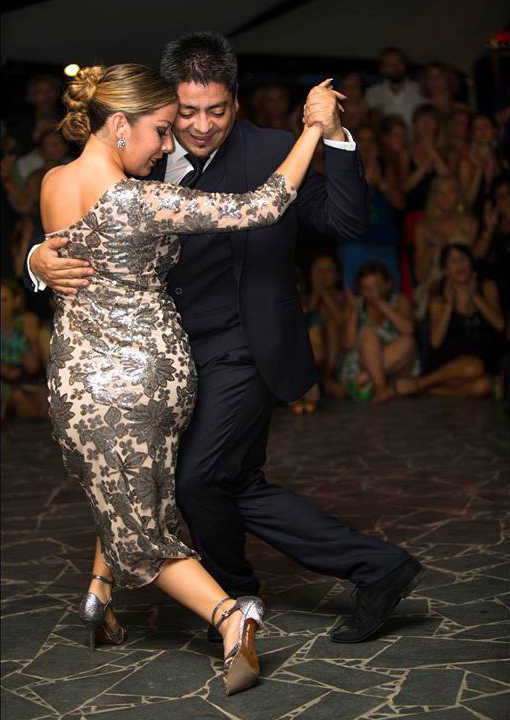 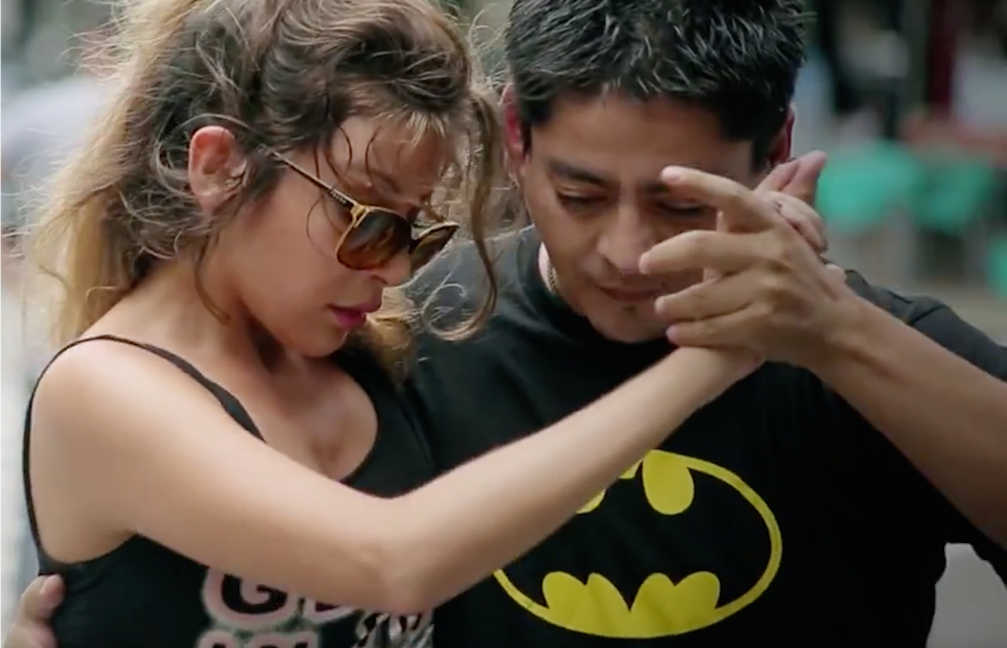 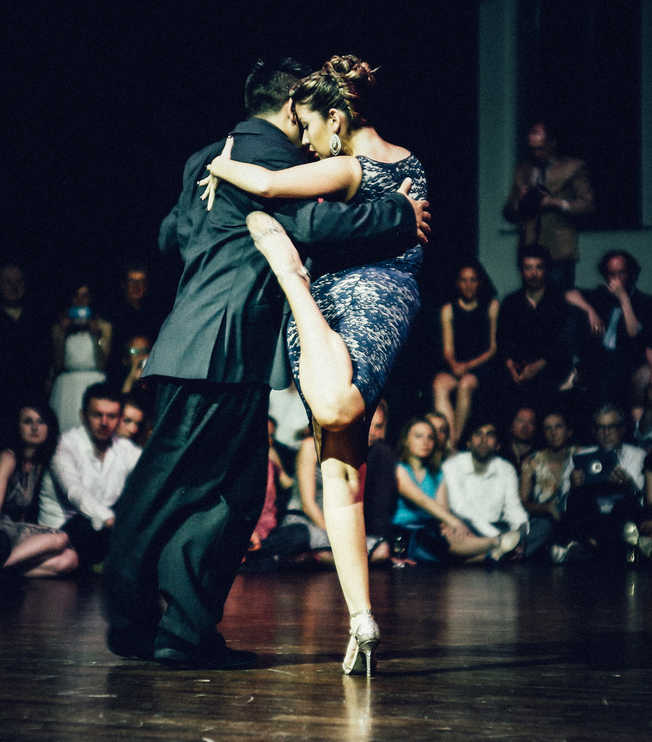 Eleonora Kalganova is a unique, generous, sensitive, and kind teacher.

She grew up in post-Soviet Tashkent, Uzbekistan (part of the former Soviet Republic). She studied dance extensively from an early age: folk, ballroom, character, historic, ballet and modern.

After successfully completing 9 years of rigorous study, Eleonora graduated from the State Dance Academy in Tashkent and became a principal dancer with the prestigious Alisher Navoi Theater of Opera and Ballet.

Through this remarkable and rare educational experience she gained a solid understanding of movement, anatomy, music, performance and dance composition.

With time, Eleonora became increasingly fascinated and involved with Argentine tango. After years of study, with intelligence, passion, professional dedication, and her unique dance background, Eleonora started to develop a very special understanding of Argentine tango.

Eleonora believes in breaking from the rigidity of steps and memorization. She encourages students to develop improvisational skills through simple and dynamic techniques, achieve relaxed and released style, and most importantly, learn the joy of dance by relating, expressing, and communicating with her partner. She has been described by a reviewer as "the most talented and playful follow I have ever seen" and "it is rare when I watch a couple dance and ONLY focus on the woman. She is that kind of dancer".

Eleonora travels extensively internationally, performing and conducting workshops around the world, where her famous Womens Technique classes bring out large numbers of eager fans. But she continues to be a student of life and tango. 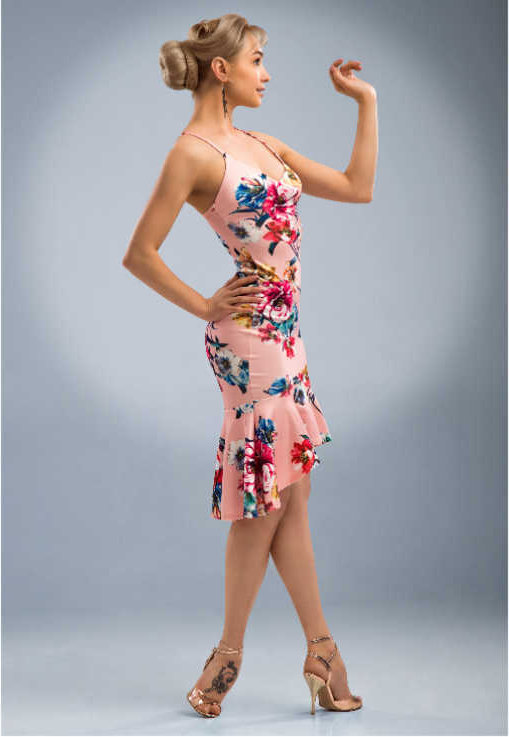 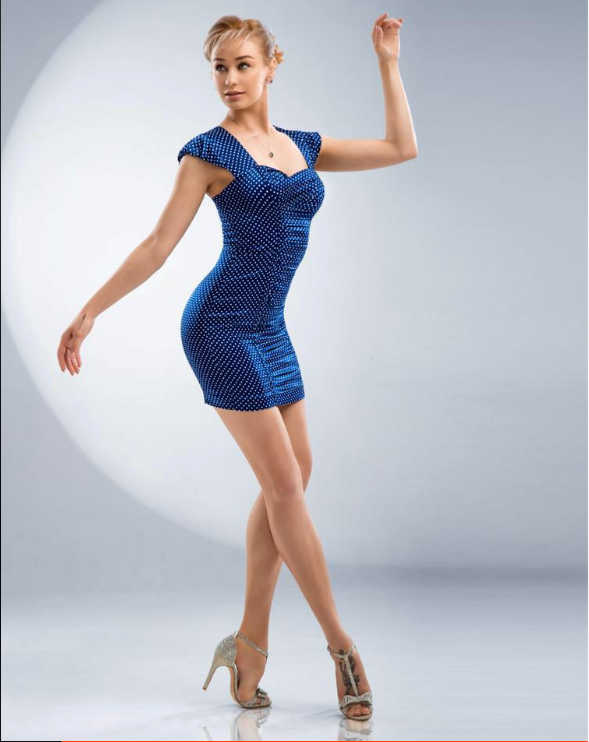 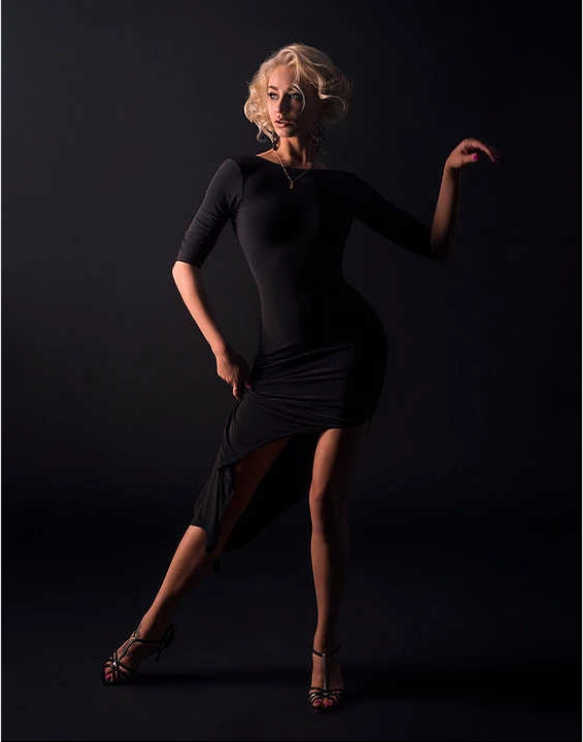 Alberto ('Tito') and Micaela ('Mica') will teaching the beginner classes. This is a weekend intesive course that gets you up and dancing within one weekend of classes.

Micaela and Alberto are the founders of the Cleveland Tango School.
Based out of New York and the Caribbean before moving to Cleveland, Alberto and Micaela have taught at the Hunter College Tango Club, Oberlin University, New York's You Should Be Dancing studios and the Piel Canela Dance Company. They have also done a number of collaborative projects with the modern dance company "The Movement Project". In Puerto Rico they taught alongside the teachers and performers of Y Entonces - Tango. Alberto has worked with the Mark Morris Dance Company in Brooklyn.
Their dance is known for its musicality and playfulness, while their teaching explores the history and traditions of tango. Micaela and Alberto dedicate themselves to helping students create more comfortable, interesting, and grounded tandas throughout the night.

In our Beginners Intensive course you will learn the fun, elegance, grace, improvisation skills, as well as the secret tango etiquette. You will be introduced to Tango structure, technique, and musicality that will get you up and going on the dance floor. Also the will be giving a FREE tango class on Wednesday September 25 at 8pm, so try it out. 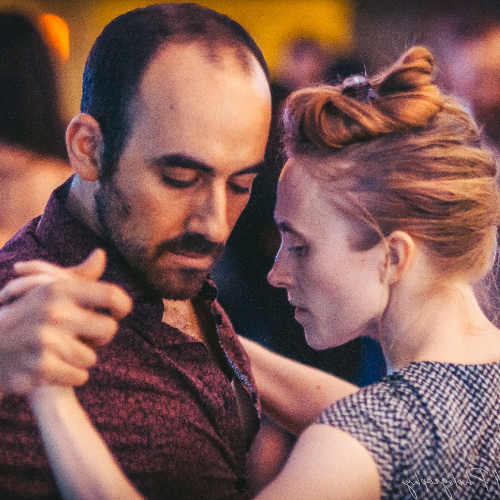 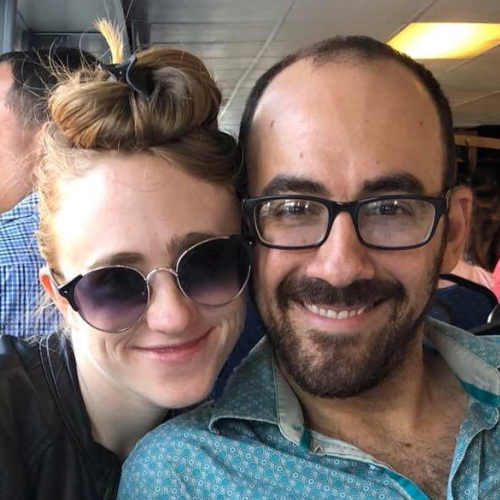